Miami Aikikai is the oldest Aikido Dojo in the Miami area.Miami Aikikai  is a non-profit  organization formed to disseminate the principles of Aikido. It admits students of any race, color, and national or ethnic origin.

Morihei Ueshiba: The Founder of Aikido 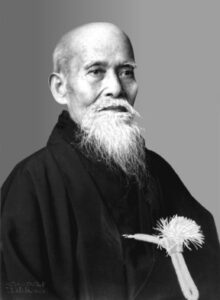 O’Sensei (Great Teacher), Morihei Ueshiba was born in the town of Tanabe, Wakayama Prefecture December 14, 1883. From an early age O’Sensei proved to be adept in mathematics, the Chinese Classics, ancient Japanese culture and Shinto. He began his formal martial training while in his teens. He trained sumo, traditional sword, spear, and ju jitsu. In 1912 at the age of 29 he moved to Hokkaido where he met the grandmaster of Daito-ryu Aiki Jutsu Sokaku Takeda. Over the years O’Sensei trained many martial arts, however it is clear that Daito-ryu and Sokaku Takeda had a profound effect on the technical aspects of the development of Aikido. His prowess and reputation as a renown master of martial arts grew. His reputation attracted many challengers who came to test their skills and refute the increasingly legendary Ueshiba. After one such encounter in which he easily evaded an attacker’s repeated strikes with a wooden sword, and did so without injuring his challenger, he had an enlightening revelation. Winning as a result of defeating another was not truly winning at all. And from that point on his deep spiritual beliefs and his remarkable art became one.

In 1942, O’Sensei , began calling his system Aikido. O’Sensei saw the great potential Aikido had to create global healing and encouraged his students to give it to the world. He dispersed many of his top students to locations around the world. O’Sensei died on April 26, 1969. His son, Kisshomaru Ueshiba (1921-1999) assumed the role of the second Doshu (present leader of The Way) and continued to teach and spread Aikido. Under his leadership the global Aikido community continued to grow. The second Doshu died in 1999. And at that time the founder’s grandson, Moriteru Ueshiba (b.1951) became Aikido’s third Doshu.

The Miami Aikikai was founded in 1978 by Nelson Andujar, 7th dan, Shihan and a direct student of Yoshimitsu Yamada, 8th Dan, Shihan. Andujar Sensei relocated to Texas in 1996 but remains in Miami in spirit.

The Instructors are all certified to teach through the United States Aikido Federation (USAF) and Hombu Dojo in Japan.

We teach traditional aikido keeping in mind its martial applications as well as its philosophy of blending and harmony.

Currently We are offering a Spring Promotion!!!

One week free of Aikido training to everyone.To Grab the Offer Contact us now.

Currently Chief instructors are Eliot W. Rifkin and Gustavo Ramos, both are  holding the rank of 6th Dan Shihans and each having practiced for over 40 years. They are grateful for the long time support and assistance of other instructors, Ayal Joshua, 6th Dan and Reynaldo Abreu, 3rd Dan.